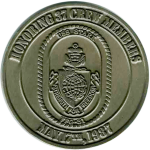 The USS Stark (FFG-31) was an American frigate assigned to patrol off the Saudi Arabian Coast by Iran and Iraq in 1984 and 1987 deployments.   On May 17th, 1987, during the Iran-Iraq War, an approaching Iraqi-piloted Mirage F-1 aircraft was detected by a nearby AWACS plane whose crew informed the Stark upon discovery.  It’s reported that an Ops Specialist aboard the Stark also picked up a blip and informed the Skipper.  Once alerted, the Stark sent two identification requests to the plane which received no response.  Shortly thereafter, it was determined that the plane was hostile and had targeted the USS Stark.  The plane fired two anti-ship missiles at the Stark shortly after 10PM, which were undetected until moments before impact.

The first missile, failing to detonate, struck near the bridge on the port side of the ship.  It’s fuel ignited, setting fire to multiple areas of the Stark, including the critical combat operations center.  The second missile, which DID detonate, also struck the ship on the port side, causing massive damage.  Due to the immediate aftermath of the attack, the Stark’s missile defense was inoperable and the Stark was unable to return fire and defend itself.

The AWACS plane requested air support for an interception of the attacking F-1, but ground control at the nearby Saudi airbase did not have the authority to order a dispatch, thus allowing the attacking aircraft to escape.  The Stark, crippled from the attack, lost 37 of its crew that night.

Though suffering severe casualties and damage, the USS Stark was eventually able to make it to Bahrain with the assistance of the USS Conyngham and the USS Waddell.  The USS Stark was decommissioned on May 7, 1999.

Learn more about the USS Stark and its timeline, here.